Fired Up for Fire Protection 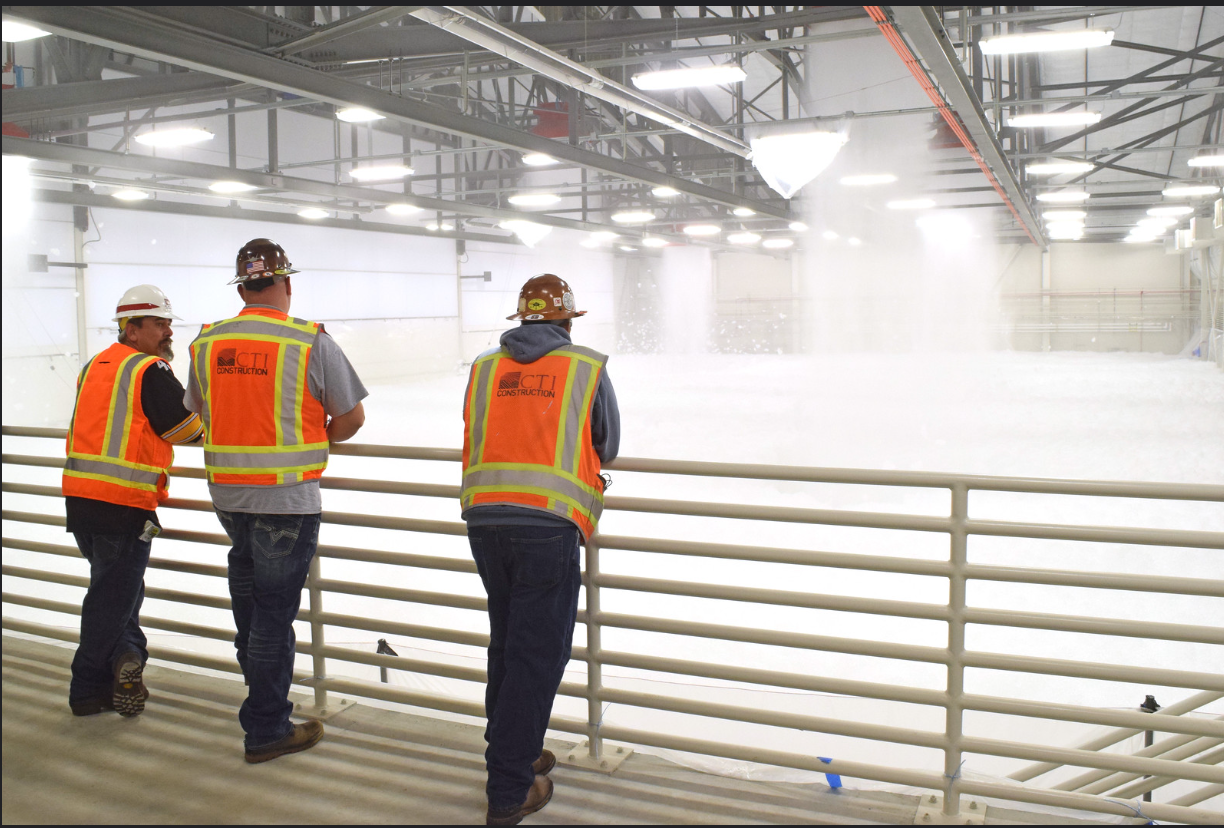 Tragedy struck Florida’s Eglin Air Force Base (AFB) on January 8, 2014. A burst waterline in the AFB’s King Hangar accidentally triggered the hangar’s fire-suppression system, filling the 90,600-square-foot hangar with high-expansion foam (HEF) designed to extinguish the fire. Employees investigating the accident became engulfed by the foam. Sadly, one employee – unable to navigate to an exit or communicate with coworkers amid the tons of opaque, sound-deadening foam – lost his life. Regrettably, and ironically, the substance intended to prevent accidental death inadvertently caused one instead.

Risks and potential hazards of this sort have weighed on my mind throughout my career. I’ve spent nearly four decades designing facilities and infrastructure for commercial, industrial, and aviation clients throughout the US and beyond. Since Day One, my top priority – superseding even cost, schedule, and efficiency – has been ensuring the safety of the people who use and work in the facilities we design.

Nowhere is the tradeoff among various risks more evident than in the discipline of fire protection. I have served on various Technical Committees for the National Fire Protection Association (NFPA) for 20 years. In this role, I’ve helped to craft and update fire-protection codes and standards including NFPA 409: Standard on Aircraft Hangars. As enclosed spaces housing multiple aircraft loaded with flammable Jet-A fuel and maintained by dozens of employees, aircraft hangars are among an airport’s most potentially dangerous locations.

Guidelines and technologies for aviation fire protection have been around nearly as long as aircraft themselves. NFPA 409 was first developed in the 1960s along with what has since its inception been the dominant technology for extinguishing hangar fires: firefighting foam. Effective but controversial, firefighting foam comes in a variety of formulas customized for diverse types of hazards. Long the gold standard for aviation firefighting, foam-based systems are recently being challenged by a newer development in the form of ignitable liquid drainage floor assemblies. 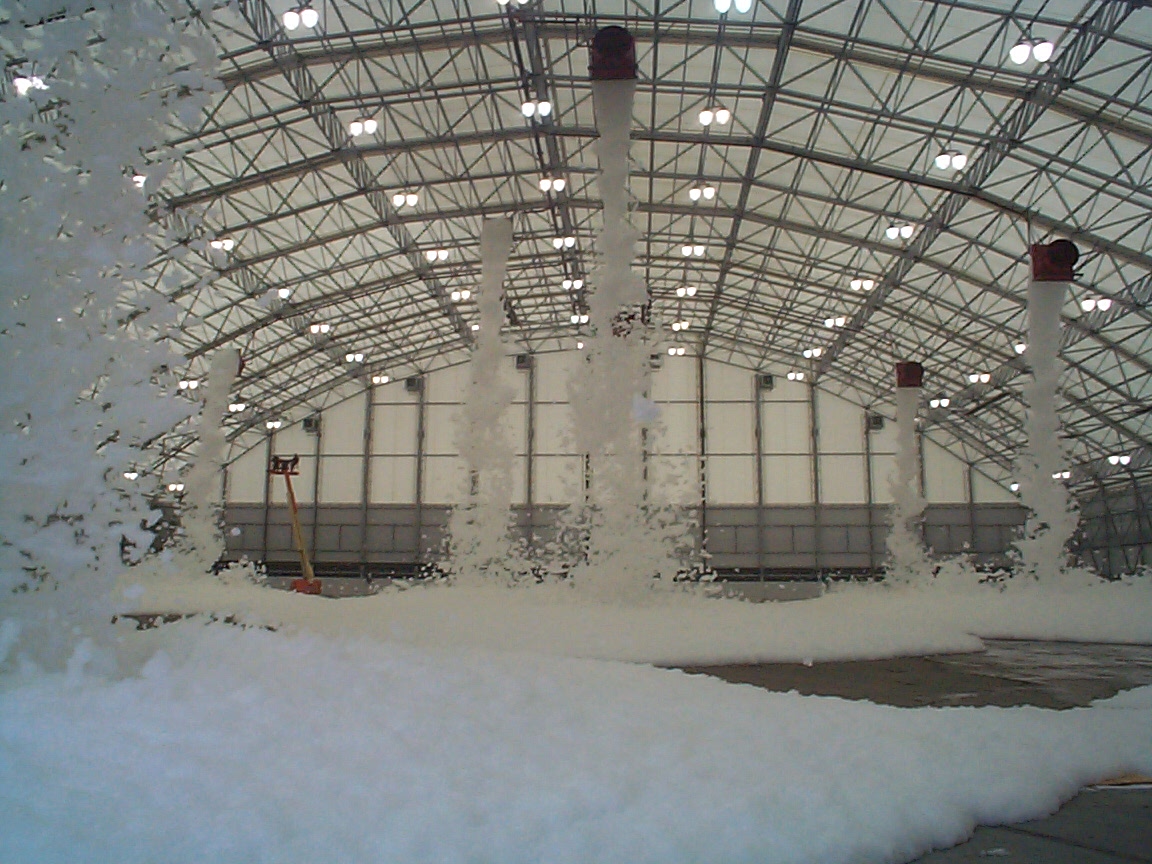 Aqueous Film-Forming Foams
The US Naval Research Laboratory initiated research and development of firefighting foams in the 1960s to improve fire-suppression performance and increase safety following a devastating fire on the USS Forrestal in 1967. Since this time, the most common means of aviation fire protection involves use of aqueous film-forming foams (AFFFs). Optimized to extinguish jet-fuel fires, AFFFs are water-based foams containing surfactants, substances that reduce the surface tension of liquids in which they are dissolved. When an AFFF is applied to a flammable liquid, a water-based film forms, isolating and cooling the liquid fuel, suppressing formation of flammable vapors, and effectively smothering the fire.

AFFFs work – no doubt about it. Since their deployment and widespread adoption, hangar fires have significantly decreased in frequency. Unfortunately, the foam agents’ undeniable efficiency comes with an array of undesirable side effects. Ironically, the rarity of hangar fires has allowed aviation stakeholders, environmentalists, and insurers the luxury of analyzing and criticizing the many drawbacks associated with use of foam-based firefighting systems.

The most significant risk of AFFF use is, of course, the potential engulfment and asphyxiation hazard to hangar personnel, as illustrated in the Eglin AFB tragedy mentioned above. Fortunately, only one such fatality has been reported to date. The two risk issues most frequently cited by aviation personnel are:

Accidental Discharge
There’s no way around it – dousing your sensitive equipment and aircraft in tons of foam will cost you, both in damage to aircraft, maintenance equipment, and other delicate systems, and then in the subsequent cleanup costs. This is true even when the foam successfully extinguishes a fire. You’ve avoided the worst, but you’re still going to take it in the pocketbook. In addition to cleanup costs, a company will experience flight cancellations and reputational damage from an event that will make at least local news. And by “expenses,” we’re talking a lot – one 2018 accidental discharge cost the hangar owner more than $25 million.

This might be bearable if false-alarm foam accidents were extremely rare or if hangar fires were widespread. The good news, as mentioned, is that actual fires are increasingly rare (though not nonexistent). The bad news is that false alarms are not especially uncommon – some studies suggest about a dozen accidental discharges occur per year. A combination of poor initial design, improper maintenance, and inadequate testing are leading to a rash of false-alarm discharges. The ratio of necessary to unnecessary foam discharges has reached the point that some experts advocate revising NFPA 409 to eliminate automatic foam fire suppression systems altogether, considering the risk of fire not worth the cost of the seemingly inevitable accidents.

Environmental Issues
Attention to industry’s effects on the environment has grown exponentially since AFFFs were first developed more than half a century ago. As you can imagine, AFFF manufacturers have had to evolve their products considerably to keep pace with changing regulations – and, frankly, they’re losing the race.

As environmental consciousness grew over time and more stringent regulations were set, widespread use of PFAS-generating foams became increasingly intolerable. Environmentalists were particularly alarmed by the prevalence of PFOS (perfluorooctane sulfonate), a particularly virulent variant of PFAS, in firefighting foam.

In 2009, the United Nations’ Stockholm Convention on Persistent Organic Pollutants was revised to restrict most use and production of PFOS. This ruling led to modernization of the manufacturing process and the creation of a newer formula that does not contain or break down into PFOS, does not accumulate in the environment, and is nontoxic. 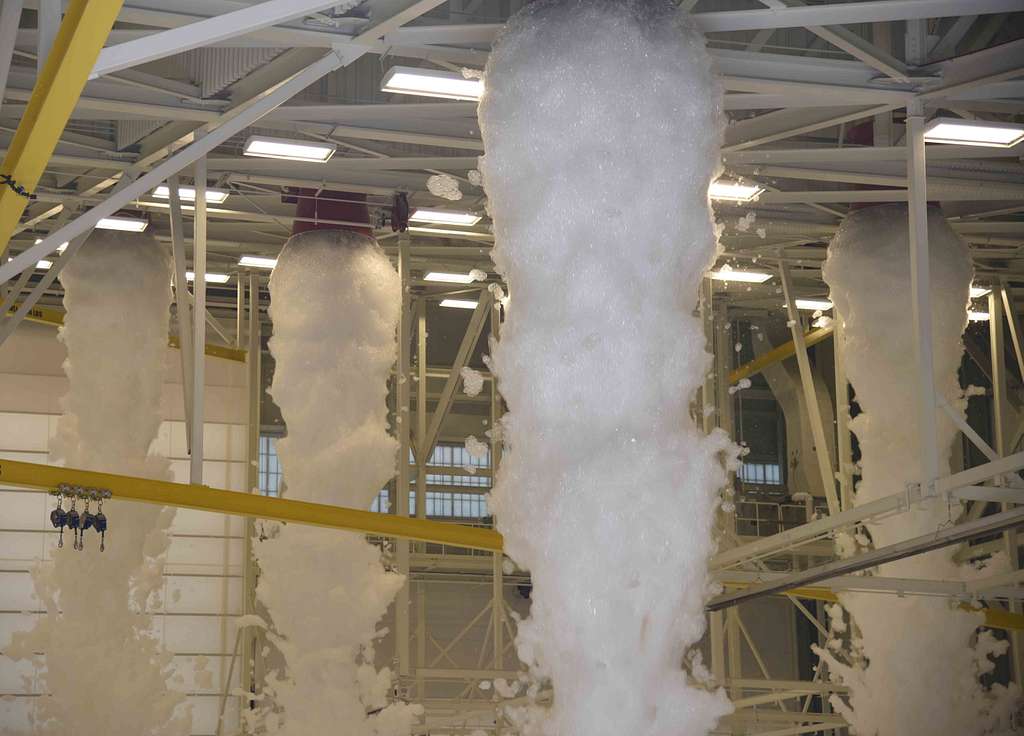 Nonetheless, even this newer telomer-based formula contains trace amounts of PFAS – and under a recent (December 2019) ruling of the US Environmental Protection Agency, trace amounts are all that are needed to investigate potential PFAS contamination and possibly compensate exposed parties under the Comprehensive Environmental Response, Compensation, and Liability Act (CERCLA). In 2021, the Town of Peshtigo, Wisconsin — the site of the deadliest wildfire in recorded human history — sued an AFFF manufacturer for damages related to PFAS contamination, receiving a $17 million settlement.

State and local governments have taken notice of the new guidelines. Approximately 18 states have adopted restrictions on AFFF use, including limitations on training, notification of PFAS content and/or release, storage guidelines, and firefighter personal protective equipment (PPE). The 2020 National Defense Authorization Act (NDAA) stipulates the phaseout of PFAS-containing foams by October 2024. While non-PFAS-containing foams have been developed, they are simply not as effective at extinguishing flammable liquids as their PFAS-bearing counterparts.

Looking at the Future
After many years of debate and testing, the NFPA 409 Technical Committee voted in July 2021 to add ignitable liquid drainage floor assemblies (ILDFA) to its standard. The newly published NFPA 409 Standard on Aircraft Hangars, 2022 Edition includes a new foam-free alternative for the protection of aircraft storage and servicing areas, which is defined as follows:

Ignitable Liquid Drainage Floor Assembly (ILDFA)
This promising new fire-protection technology has recently appeared on hangar owners’ and designers’ radar. The ILDFA works by allowing flammable liquid to drain out of the hangar altogether rather than remain on the surface for extinguishment. An ILDFA is essentially an overlay of hollow aluminum flooring placed atop the existing concrete hangar flooring. The aluminum flooring is perforated, like a cheese grater, and connected to a sloping trench system that directs spills to a safe and fireproof containment area.

When a jet fuel spill occurs, the ILDFA’s fiberoptic sensors detect the spill and activate a flushing manifold that pumps the dangerous liquid into the trench system and from there into containment. The speed at which the process occurs prevents most damage while avoiding the need to douse the area in sticky and potentially hazardous foam.

We evaluated the ILDFA during a recent project to renovate a hangar fire-protection system. We were sufficiently impressed to recommend the system as a desirable upgrade option. However, we recommend to our clients that the selection decision among NFPA fire suppression system approaches should be based on 50-year Present-Worth Analysis. This analysis considers not only construction and maintenance costs, but also the reduction in environmental risk liabilities.

It’s early still, but the ILDFA might supplant foam-based systems in the future.

Going Forward
For as long as I’ve been in the fire-protection business, it’s interesting and heartening to see so much debate and so many new developments surrounding this critical topic. I look forward to seeing new technologies and methodologies that increase fire-protection efficiency and reduce costs while always keeping foremost the most important consideration – worker and stakeholder safety. If you have questions or observations about fire protection, email me at tgambino@prime-eng.com.