Once again, Prime participated in the American Council of Engineering Companies of Georgia’s annual Introduce a Girl to Engineering Day. Kennesaw State University’s Marietta campus hosted nearly 250 upper-elementary and middle school-aged girls interested in STEM. This event exposed these young ladies to engineering through a variety of games and activities.

Approximately 40 Georgia engineering firms participated, emceeing activities ranging from building a DaVinci bridge to scenario-based “traffic scrambling.” After a keynote speech from Holly Painter with KCI Technologies, the young ladies were released to participate in booth activities, trivia games, and a chance at a door prize.

Piggybacking off our theme from last year, we picked an activity that allowed the girls to use their hands while learning a cool part of engineering. We focused on “Navigating the St. Lawrence Seaway and the Great Lakes.” Our idea was to show how a lock system works to allow large vessels to travel on the St. Lawrence River. 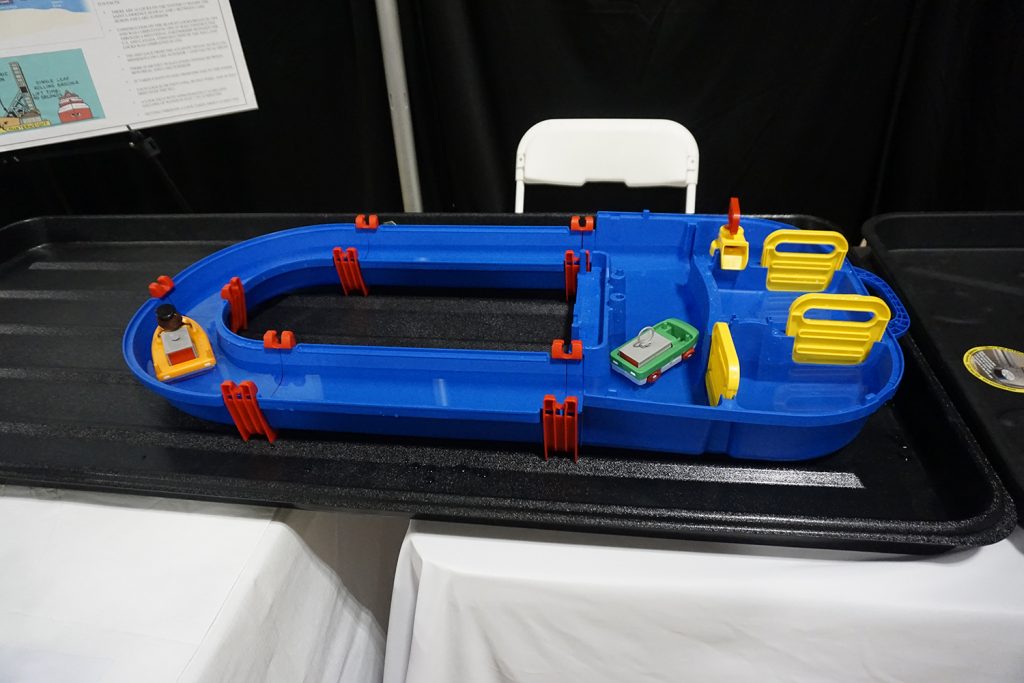 We purchased two identical lock system toys for our display, as seen above. The girls used their hands and brains to physically move toy boats through the water-filled lock system. While they guided the boats through, we explained the St. Lawrence Seaway and its intricate lock system. Another functional model, built from Legos, demonstrated the workings of the Panama Canal.

To give the participants a full look into all aspects of Prime Engineering, we recruited several volunteers from a variety of departments and backgrounds. Here are a couple of perspectives on the day.

“I was honored to participate in ACEC’s annual Introduce a Girl to Engineering Day. As a child, I was not exposed to any facet of engineering. However, I had a passion for my favorite toys, Legos, and loved to build any- and everything I could with them. I decided at a young age I wanted to transition my skills and passion for Legos into a career, so engineering made sense.

“One of our booth activities was perfect for me since it involved a Lego replica of the Panama Canal that showed how the canal’s third lock system worked. The girls could play with the model while learning interesting things about engineering: for example, raising and lowering a toy ship through the lock system or turning levers to open and close the various gates.

“Girls’ interest immediately piqued once they saw we were using a Lego model. I told them that it was a replica of the Panama Canal lock system and pointed to our video screen display to see a time-lapse video of the canal lock system in action. At first, the girls were just eager to “play with a toy,” but after some discussion, they started to understand the concept. They seemed really excited to see a real-life video of the process that they were using their hands to work through.

“I pointed to the video while they worked through the lock system and explained why they had to take certain steps to move the ship forward. I explained that the lock system is used to raise and lower ships to different levels on a waterway. My main point was: Once you move the ship to another level, you have to make sure the previous gate is closed before lowering that level, so the water from the previous chamber doesn’t flow on top of the ship.

“Seeing their faces light up when they understood was amazing. Some of the girls got so excited that they came back for a second or third round, eager to prove to me that they grasped what was going on.

“Another highlight was our display of small puzzle prizes. The girls saw the puzzles as a challenge and wanted to hang out at our booth just to show how many they could solve. I even had a few parents asking to hide out behind me and play with the puzzles while their daughters went to different booths. That alone created great conversations and a lot of laughs.

“Several of the young ladies were interested to know my specific engineering discipline and inquired about cool things I’ve worked on throughout my career. It was a great experience to show the girls how fun engineering can be and that women can thrive in the industry. I wish I’d had an opportunity like this when I was their age, so I’m grateful that I got to participate in the beginning stages of their engineering experience. It was truly amazing, and I cannot wait for next year.”

“I was excited to participate in ACEC’s annual event. I did have to get creative about how to demonstrate my field — surveying — and connect it to engineering.

“Therefore, I decided to show how Prime’s robotic total stations and GPS units supply the engineers with data that they turn into maps for design. I explained how we trek through the woods and along the highways, gathering the engineers’ data so they can develop accurate schematics.

“A few of the girls commented that they had seen our Prime trucks in various locations, mainly on the side of the road. After a brief demonstration and explanation of the equipment and principles of geometry and trigonometry, the girls gained a better understanding of what a surveyor does. Now when they drive past us on the way to soccer or cheerleading practice, they will know exactly what we are up to.

“I received several interesting questions throughout the day. One prominent question involved working outside in the cold. The ladies were curious about what happens when it snows and if we can still work in the cold temperatures. Luckily, I happened to be wearing some of our Prime cold-weather gear to show them while explaining how surveyors are masters of layering our clothing. (And some of us love the snow!)

“One very on-point question of the day was about the number of females in the surveying field. I told them they were very few ladies currently doing this type of work and, in a candid response, one little girl replied, ‘It’s probably because of the snakes and bugs.’

“I don’t know if I convinced any of the girls that surveying is the career path for them, but I do know they have a better understanding of the people on the side of the road with brightly colored clothes and funny-looking cameras.”

ACEC’s event has become an annual staple for Prime’s team and an event that we truly love. According to the Society of Women Engineers (SWE), “Women have increased their numbers in many professions previously dominated by men, including law, business, medicine, and other STEM fields in the US; however, the number of women in engineering in the US has not increased since the early 2000s.” Currently, SWE estimates that women make up only 13% of the current engineering workforce. Promoting females in this industry is more critical than ever, and Prime intends to do our part to educate and uplift the next generation of female engineers.