On a beautiful, sunny fall day, several Prime Engineering employees, myself included, volunteered with the City of College Park and KaBOOM! to build a new community playground on Camp Creek Parkway. What we built was originally designed by children from the community who, in their role as creative architects, drew their dream playground with crayons. Those crayon images were then given to a manufacturer to produce. We helped to install the new playground and bring the dreams of some 600 children to life. They now have a safe place to play: a dream we all can embrace.

KaBOOM! is a national non-profit organization dedicated to ensuring that all kids get a childhood filled with the balance and active play needed to thrive. KaBOOM!’s mission is to “encourage this message by creating places to play, inspiring communities to promote and support play and driving the national discussion about the importance of play fostering healthy and productive lives.” In its 22-year history, KaBOOM! has successfully built 3,000 playgrounds, improved or built more than 16,700 playspaces, and in the process served more than 8.5 million kids across the U.S.

We began our morning with a personal trainer who had done PT for several Atlanta Falcons, ensuring we were stretched and limber for the day’s tasks. In so doing, we got enough exercise to feel like we had already worked a full day before the real fun began. 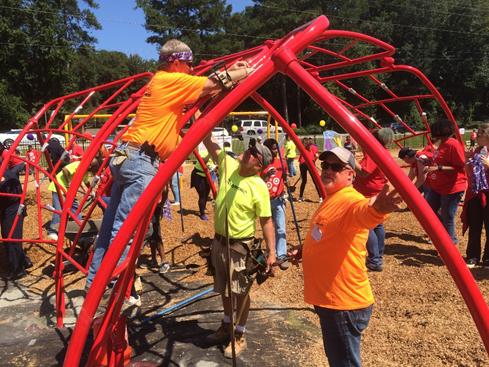 The roughly 250 volunteers were then split into smaller groups of 10 and were assigned a team leader and an initial task. My group was tasked with mixing concrete, which would be used to secure all the playground equipment. We were given five to six pallets of ready-mix concrete to mix by hand. This was quite a grueling task, enough to require assistance from other groups once they had finished their lunch. If the pre-task stretching hadn’t worn us out, this hand-mixing surely did.

Charlene, one of our designers, was part of a team that spread mulch around the playground area. The group was given several loads of high-quality mulch, which was spread 12 inches thick – thick enough to provide extra safety for children playing and jumping around on equipment.

Mike, our Survey Manager, was placed on the team assigned to assemble the various playground equipment. The colors of the playground appeared as though they were taken straight from the children’s drawings. Bright shades of red and yellow made the community playground come to life, making it one of the most colorful playgrounds I have seen. 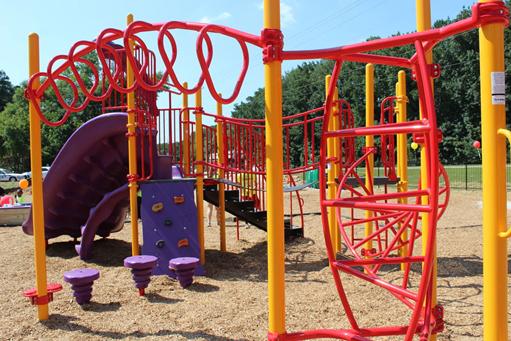 The event was extremely well organized and the leaders ensured that all participants had a constructive task for the day. KaBOOM! is a fabulous organization with which I look forward to volunteering in the future. For more information about this wonderful non-profit organization and future volunteer opportunities, check out KaBOOM!’s website HERE.