Mapping Our World: Survey Technology Past and Present

First developed in the ancient Bronze Age societies of Mesopotamia and Egypt, surveying was integral in organizing the lands and developing the projects of humanity’s earliest civilizations. Surveyors helped raise the Pyramids, aligned the walls of Babylon and Ur, and delineated the vital boundary markers that let farmers safely till the soil near the life-giving but flood-prone Nile.

From the beginning, surveyors supplemented their know-how with tools. Simple ropes and chains were among the first tools developed in the surveying profession, later supplemented with more sophisticated machines like the plummet, square level, and groma. But in today’s world, our profession is being revolutionized by technology of which yesterday’s kings and emperors could only dream. While Prime has the array of Total Stations, GPS equipment, and data collectors you’d expect a leading survey firm to have, below I’ll discuss a few of the most cutting-edge, innovative, or just plain cool tech in a surveyor’s toolkit. 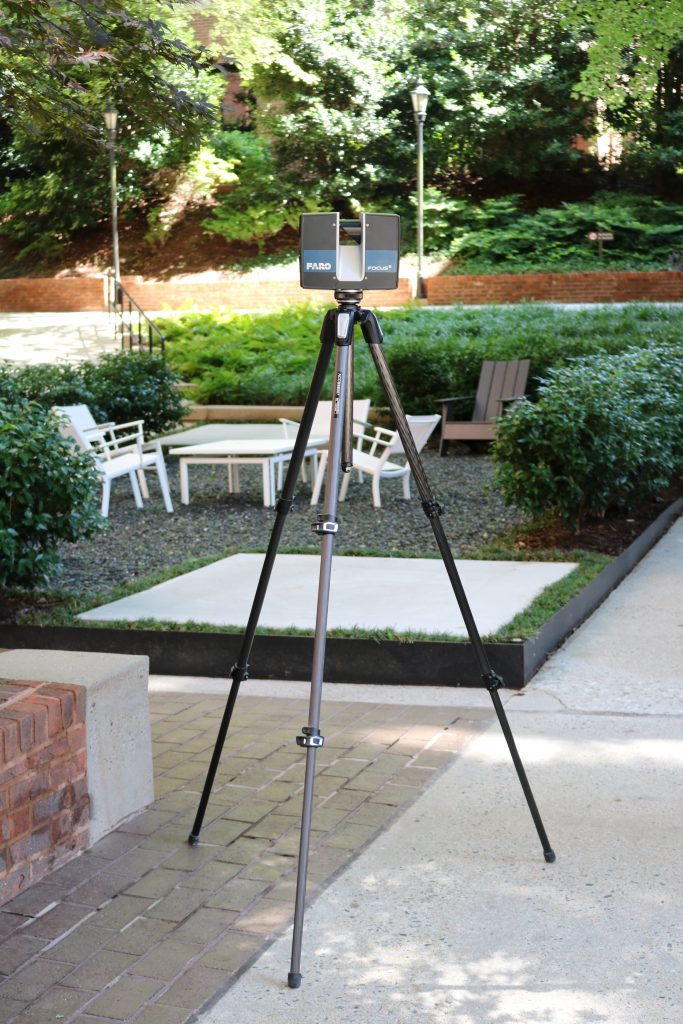 As the accompanying photo shows, the scanner looks like a camera set on a tripod. When set and activated, the scanner emits a laser beam in a 360-degree rotation. The beam sweeps the surroundings out to about 120 yards, and the scanner then records a coordinate of whatever it contacts. By capturing millions of coordinates in a point cloud, then downloading the data into modeling software, we can generate a picture-perfect image of the scanned object or space.

Other advantages of the Faro laser scanner include its lightness, portability, and ease of use — it’s like using a digital camera. In fact, the scanner includes an eight-megapixel, HDR camera that adds a natural color overlay to the scan data while also generating images regardless of lighting conditions.

The scanner proved to be our MVP on a recent project. A client needed to obtain 3D maps of existing conditions in a six-story building, from which we’d develop a 3D model and drawings of the floors. We conducted a comprehensive 3D laser scan, imaging each floor of the building, then using the data to generate a 3D model of the entire structure. The process took place in a fraction of normal time while avoiding a human survey crew’s inevitable disruption to the facility’s ongoing operations. 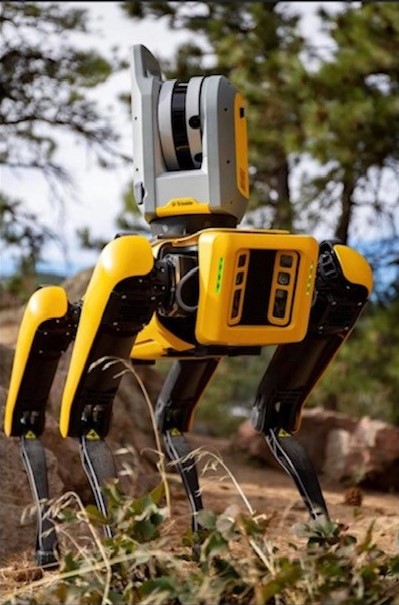 I can’t lie: Surveying can be dirty, messy, even potentially hazardous. We’re committed to getting our data and measurements by any means necessary, and sometimes that means hiking, wading, crawling, or squeezing into less-than-pristine areas. So I’ve followed with interest the partnership of Boston Dynamics, Trimble, and Hilti in adapting Boston Dynamics’ autonomous robot “Spot” to integrate with surveying technology.

“Spot” is a four-legged robot that, as its name suggests, has about the size and build of a dog. Spot can easily navigate obstacles and bypass rough terrain, courtesy of five pairs of integrated stereo cameras, an inertial measurement unit, and sensors that calibrate where and how firmly Spot’s legs should contact the ground. In short, Spot can get around as easily as a real dog, and its durable mechanical body makes it ideal for accessing sites where humans — or biological dogs, for that matter — might be hesitant to go.

By partnering with Trimble and Hilti, Boston Dynamics has equipped Spot with those companies’ reality capture equipment, turning the robot into a data-gathering device as mobile as any human surveyor and far less subject to injury or fatigue. Configured with sensors and data collectors, Spot is ideal for performing routine, repetitive, or hazardous work while human surveyors handle other tasks.

And rest assured, Spot will not chase the mailman unless programmed to. 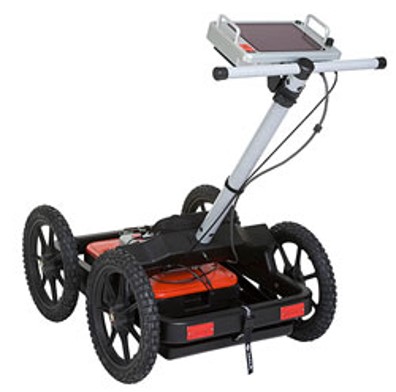 I’ve spent decades performing Subsurface Utility Engineering (SUE) and am happy that Prime has added this service to our suite of offerings. SUE finds and maps objects and utilities below the ground. It’s essential for locating and accounting for buried pipes, well casings, septic tanks, and similar infrastructure.

As even surveyors aren’t Superman (much as we’d like to think so) and don’t have X-ray vision, when performing SUE work, we lean heavily on technology including ground-penetrating radar and radio-detection sensors. I find Mala’s suite of ground-penetrating radars (GPR) particularly helpful. GPR uses radar pulses to image the subsurface environment. This nondestructive method emits electromagnetic radiation in the microwave band (UHF/VHF frequencies) of the radio spectrum, which reflects off subsurface structures. Sensors then detect and calibrate the reflected energy, accurately measuring the size, distance underground, length, and other parameters of iron, steel, concrete, aluminum, and other objects.

Similarly, Schonstedt’s ferromagnetic locators are portable, easy to use, and great for locating ferrous object below the surface. We use these tools to find iron pins and other metal property corners, as they act like “dowsing rods” that let a user detect and very accurately measure buried metal objects while walking a site.

Recently, these tools helped us at Prime give a client a Quality Level A (most exacting) SUE utility scan to identify potential utility conflicts. First, we field surveyed using robotics and GPS equipment, checking our engineers’ designs to ensure no conflicts existed with proposed waterlines and existing utilities. Once we’d found and identified potentially problematic utilities, we used our SUE radio detection equipment and ground-penetrating radar on utility crossings to pinpoint horizontal and vertical positions. This task let the team provide proper cover on pipeline crossings, speeding delivery while keeping lines in service. 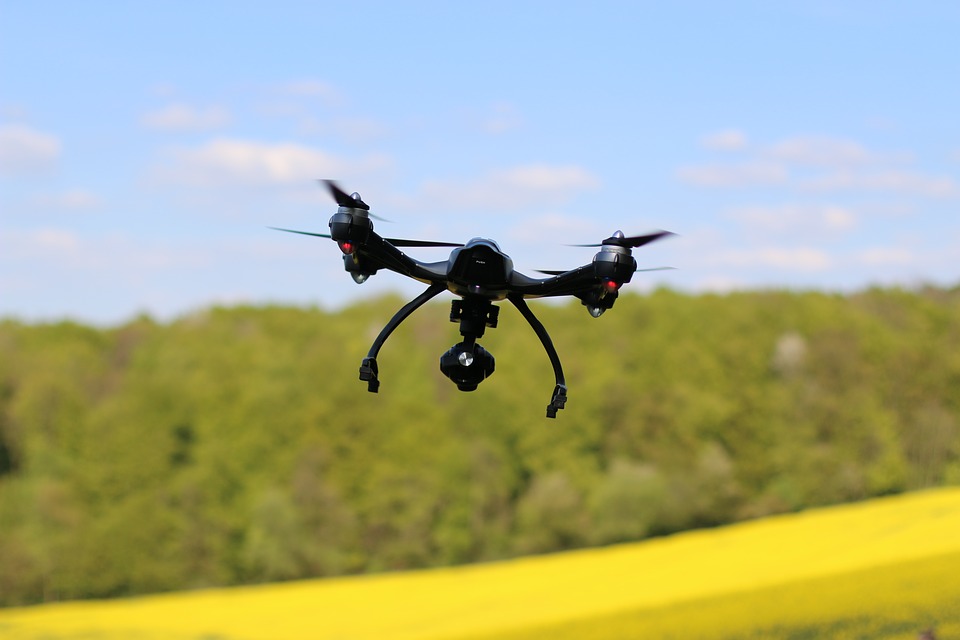 Eyes in the Sky: Drones

Drones — remotely guided aerial vehicles — have been in the news quite a bit in recent years. This coverage is hardly surprising, as drones have transformed fields ranging from the military to commercial to shipping. Never shy about appropriating new technology, surveyors have incorporated drones into our high-tech arsenal as well.

From a survey standpoint, drones literally give us a bird’s-eye view of the area we’re surveying. The advantages are threefold: accuracy, safety, and efficiency.

Pre-flight planning is essential when deploying drones. A surveyor can preprogram the drone’s entire mission to ensure adequate coverage. In some cases, a flight plan must be approved by the FAA before the drone can leave the ground and the surveyor needs a drone pilot’s license.

We still do a lot the old-fashioned way. Prime’s crews still go into the field to observe and measure, like surveyors have for nearly 5,000 years. But recent technology multiplies our capabilities astronomically, letting us deliver tremendous Return on Investment in terms of improved speed, accuracy, and value.