As we move into summer and, more importantly, reopen offices, restaurants, theaters, and other facilities, we at Prime see benefits in giving many of these places a post-pandemic facelift. Prime helped do just that for a longstanding client when designing a new landscape plan for the client’s two-acre corporate headquarters building in Atlanta, Georgia. 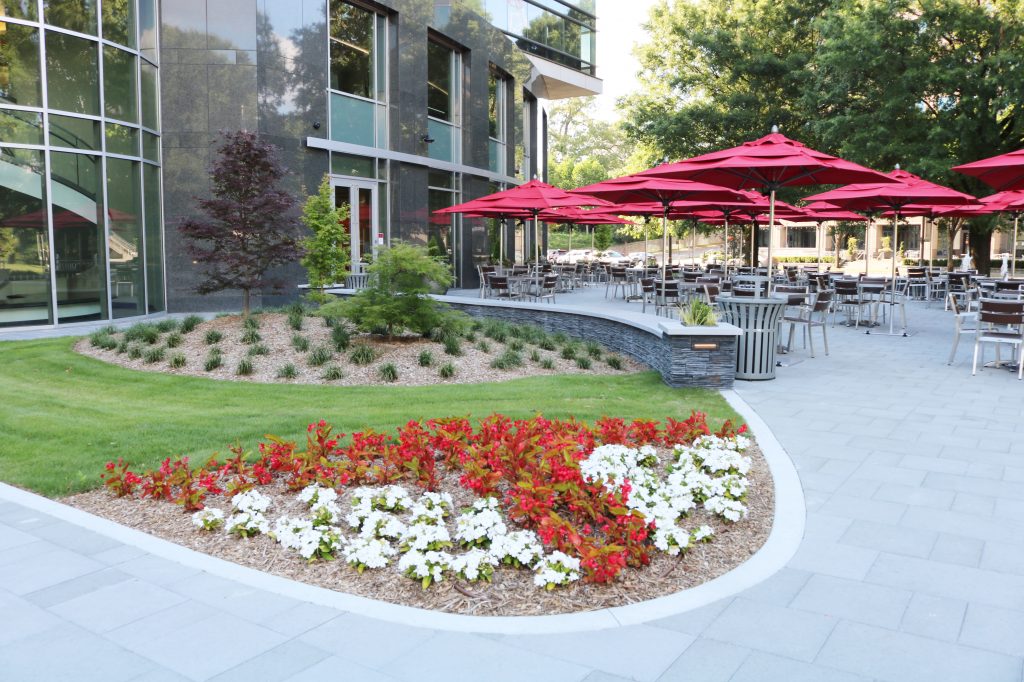 COVID and its aftermath have changed many realities about the work world and employees’ relationships to office space. The client wanted its renovations to dovetail with this “new normal.” In particular, the client wanted to expand its outdoor dining area significantly. At the time Prime was retained, the facility’s outdoor café and dining room took up only a 10’ x 10’ area and housed only two tables. The client wanted a much larger, fully furnished outdoor space that could host sizable employee meetings and events. This goal pushed the Prime team to conceive a creative site and landscape plan that optimized the arrangement of a considerably greater number of outdoor furnishings. 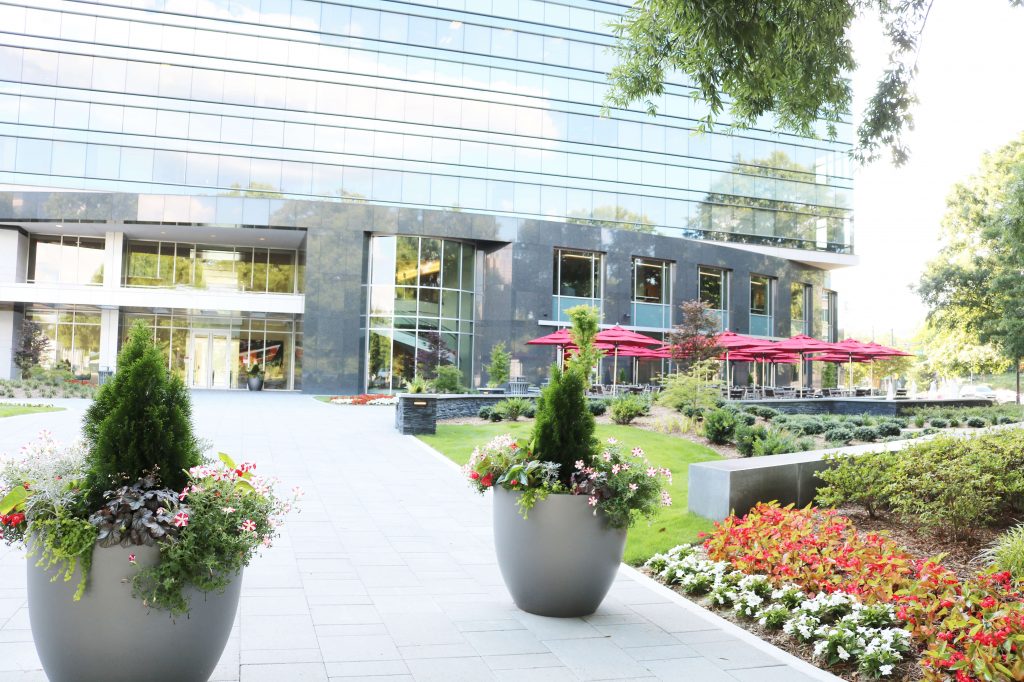 In addition, Prime needed to solve a significant structural concern. The site sits atop an underground parking deck. The original site was overgrown with sickly 20-year-old cypress trees whose weight and roots on the deck’s concrete roof caused a potential structural hazard. These trees needed to be removed and replaced with lighter foliage that wouldn’t compromise the integrity of the deck’s ceiling. Fixing this issue also meant greatly curtailing the depth of the soil in which replacement plants could grow.

Other issues included designing the expanded space such that security could monitor the area, as well as ensuring the site was ADA compatible and water quality compliant. 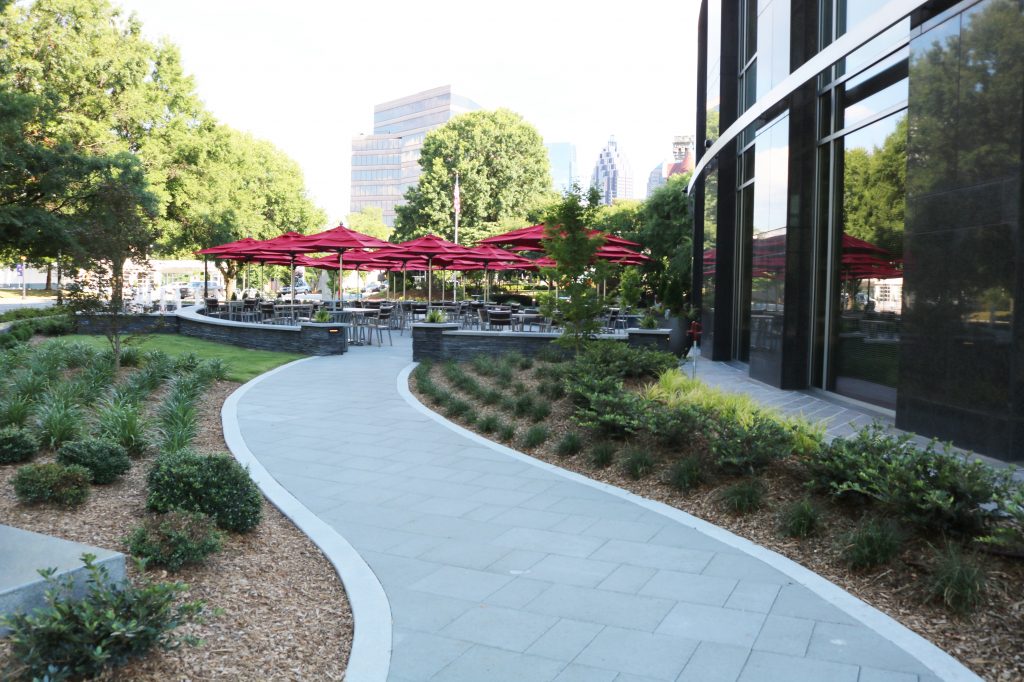 Prime’s first task was to perform a structural survey of the site. Based on that survey, Prime devised a comprehensive plan that defined all needed landscape, irrigation, tree, and hardscape features. The plan delineated the new trees and shrubs to be planted, identified features to be demolished, and set out guidelines for new walls, footpaths, paving stones, and other hardscape elements.

To accomplish the client’s primary goal of having a larger outdoor gathering space, Prime expanded the existing outdoor dining area to incorporate nearly a dozen new tables, choosing a square shape for the tables so they could be connected and arranged as needed for larger meetings. Surrounding the central dining area, several new ADA-compliant footpaths allow employees to stroll around the refurbished space. 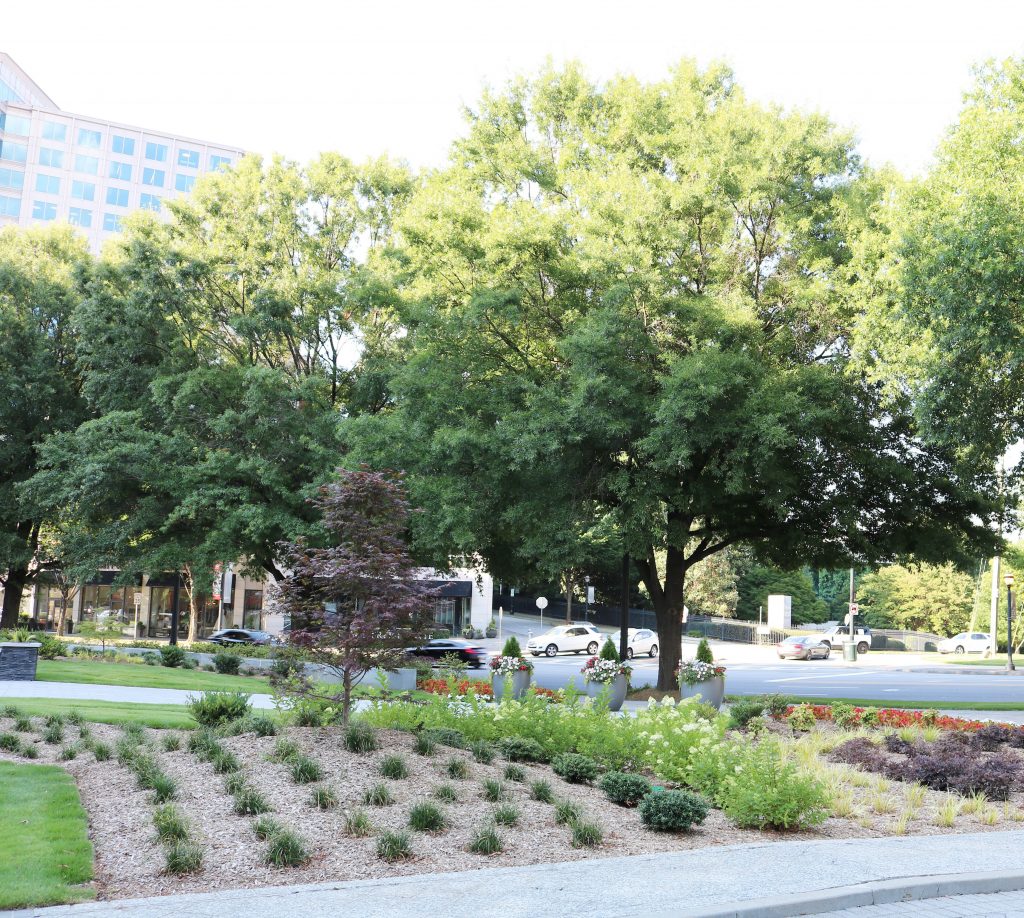 Prime’s next big task involved mitigating the potential structural concerns with the large trees weighing down on the parking deck below. Removing the cypresses solved the most “pressing” (pardon the pun) problem, but they needed to be replaced with smaller trees, fresh shrubs, flower beds, and similar greenery. Prime started by acquiring a specially engineered soil that was lightweight and easily drainable, then selected an array of visually appealing plant species that could grow within the soil’s depth limitations.

In place of the cypresses, the Prime team incorporated small trees like Japanese maples that could grow in the shallower soil. Not only are the new trees lightweight enough not to endanger the parking deck, but the smaller tree canopy now allows other foliage to grow without blocking needed sunlight. Prime’s plan considered aesthetics as well – for example, the Japanese maples’ red bark is particularly eye-catching when arranged against the facility’s charcoal-gray walls. 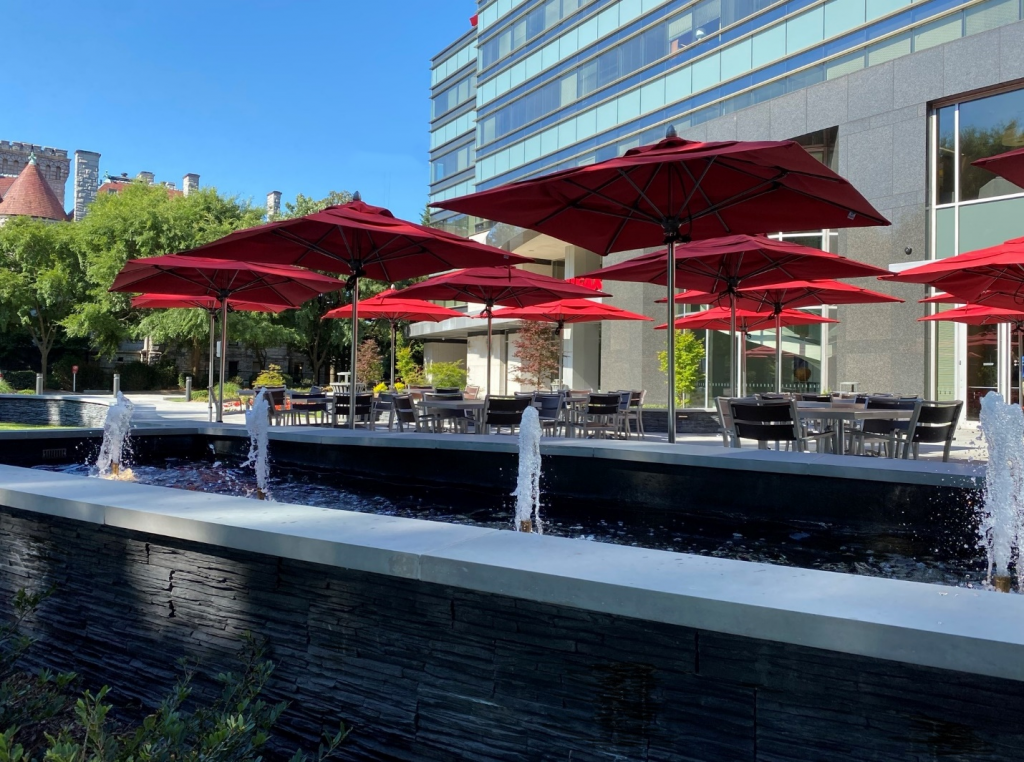 Without the canopy provided by the old cypresses, shading the central area became an important consideration. Prime’s original plan was to design an overhanging canopy for the dining and meeting area, but this proved to be structurally infeasible. Prime’s alternative was twofold. First, the team installed large umbrellas next to each table. Square like the tables, the umbrellas can be easily reconfigured to provide shade for a large gathering. Next, Prime designed the space to accommodate temporary tents for employee functions.

Prime also redesigned the irrigation system, landscaped the greenspace between the new footpaths, and designed a comprehensive lighting system for the whole area. To fix old and dilapidated pavers, Prime’s team performed significant regrouting and hardscape replacements. During this task, Prime also added a fountain, both for its visual appeal and to mitigate the noise of nearby street traffic. 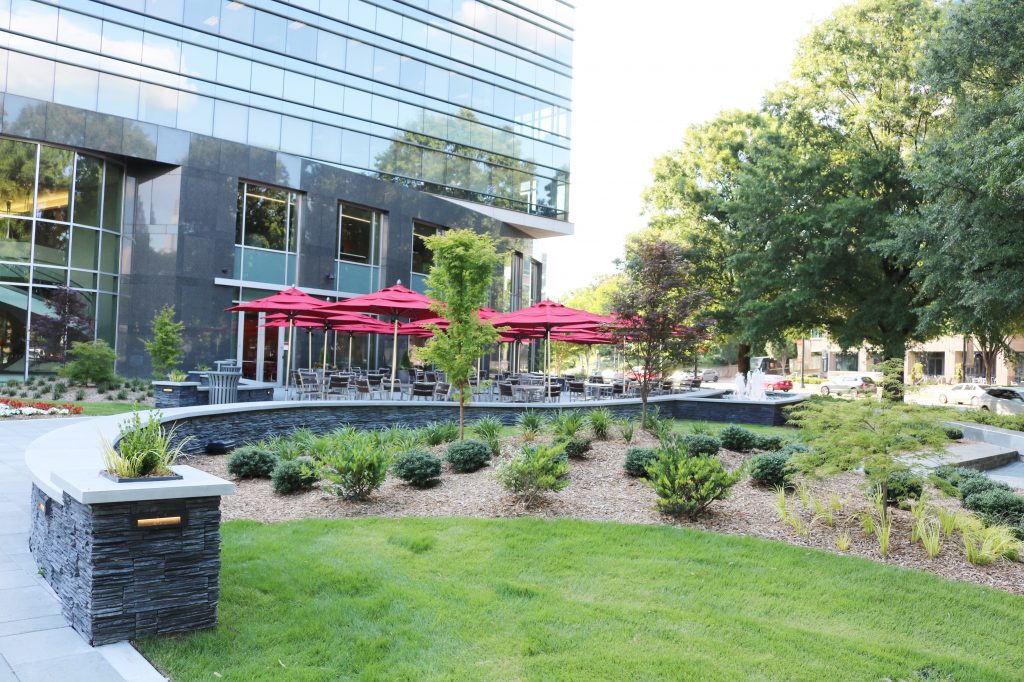 Following design, permitting, and construction, and just in time for pleasant summer days, the facility has debuted its makeover. The accompanying pictures show the facility’s renovation better than words could. Most importantly, Prime’s client has been highly complimentary of the new site, which has begun to host meetings, events, and other functions on a weekly basis.

Landscape Design Lead Charlene MacPherson said, “Working with the client and their team of contractors was pure joy. It was exciting to help create an amazing space to welcome back employees in the wake of the pandemic. This new space allows for creativity, collaboration, socialization, and relaxation in a safe environment.”